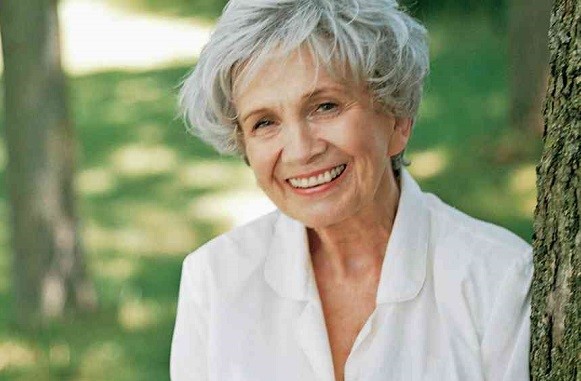 “They had usually prepared supper together. One of them made the drinks and the other the fire, and they talked about his work […] and about whatever Fiona was reading and what they had been thinking during their close but separate day. This was their time of liveliest intimacy, though there was also, of course, the five or ten minutes of physical sweetness just after they got into bed– something that did not often end up in sex but reassured them that sex was not over yet” (“The Bear Came over the Mountain” from Hateship, Friendship, Courtship, Loveship, Marriage: 284).

“Even though he’s just in from the cold, he’s white. Put a candle behind his face, it’d shine through as if he were wax or thin china” (“Pictures of the Ice” from Friend of my Youth: 154).

“This was Ralph Gillespie. If Rose had met him on the street she would not have recognized him, he would have been a stranger to her, but after she had looked at him for a moment he seemed quite unchanged to her, unchanged from himself at seventeen or fifteen, his gray hair which had been light brown still falling over his forehead, his face still pale and calm and rather large for his body, the same diffident, watchful, withholding look. But his body was thinner and his shoulders seemed to have shrunk together. He wore a short-sleeved sweater with a little collar and three ornamental buttons; it was light blue with beige and yellow stripes. This sweater seemed to Rose to speak of aging jauntiness, a kind of petrified adolescence. She noticed that his arms were old and skinny and that his hands shook so badly that he used both of them to raise the glass of beer to his mouth” (“Who Do You Think You Are?” from Who Do You Think You Are?: 207-208).

“-‘You can’t go thinking you are better than other people just because you can learn poems. Who do you think you are?’

“Out there,” said Flo, jerking her head. “Out to the whattayacallit.

“They hired you to take me, now you get a move on and take me,”

Grant said, “Meadowlake. We ‘re not at that stage yet.”

Gort Paniello, Marta. “Identity in Old Age: Meanings of Ageing through Alice Munro’s ‘In Sight of the Lake’”. Borders, Intersections and Identity in the Contemporary Short Story in English. Santiago de Compostela, 23-24 May, 2019.