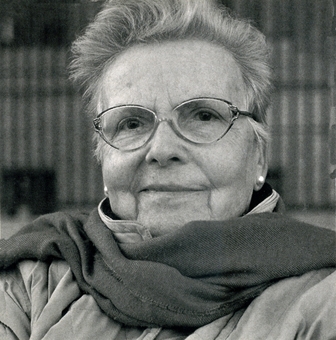 Teresa Pàmies has been known, recognized and studied for her work and protagonism in the political struggle, feminism and activism. Being a woman of great reference, Pàmies, the woman and her work is much more and has more interesting facets to discover.

From a very young age she lived in the front line of the war, political activism and exile. Writing from her experience, in autobiographical form, the narrative or novel came later. Her first text and first success, Testament to Prague, was published when she was 52 years old. Her last published work is dated 2008, at the age of 89. Her work is, therefore, thought out and written from conscious and active maturity. In this study, we look at one of her most interesting contributions, the social construction of ageing that she creates and gradually unfolds throughout her work.

Ageing is a very present aspect in her work and is explained in her own voice or by the main and secondary characters that give it life. It is also a core theme in several of her books, as are these examples:

For your interest, we reproduce the opening phrases of “The Ageing Adventure”. In it she outlines the point of view from which she faces this stage of life:

“In the late sixties when Simone de Beauvoir was working on her essay “La vieillesse”, people close to her said “What a crazy idea! You’re not old. What a sad subject to write about!  The famous French author was about to turn sixty. She was sixty-two when the book was published and it was translated into many languages including Spanish (“La vejez”).

I couldn't be blamed for the same because I started writing “The Adventure of Growing Old” when I was eighty-two, half of which I dedicated to writing the chronicle of my generation, which has aged without realizing it because, fortunately, we grow old little by little. If we were to grow old suddenly, we would not be able to withstand the impact. Human nature must have programmed ageing in stages and gradually and it must be more imperceptible for some than for others, although for all of us it has the same end" (p.9).

Ageing is an artistic process, an adventure, as she herself confirms. Our aim is to analyse it by highlighting all the dimensions with which Teresa Pàmies has been building it and narrating it, in a thoughtful, involved and active way. Exactly as she lived from the beginning to the end.

It should also be remembered that the year, 2019, was a year of commemoration in her honour.

Led by the researcher on 22nd of November "Conference, Teresa Pàmies Saviesa the Woman in capital letters", in the Civic Centre of Balàfia.  https://www.facebook.com/events/498938240831030/